You are here:
Home
History

JAZO was founded in 1961 by the grandfather of the current managing director Axel Jansen. Jan Jansen senior founded a one-man company based on his ambition to build up a business in metal technology with modern production machines. Jansen Sr. started his business with little capital, simple tools and a limited workspace. His great dedication and enormous expertise ensured that a profitable company was created within two years.

In October 1973 Jan Jansen junior is appointed as director of JAZO Zevenaar and leads the company together with his brother Gerrit. In the meantime, a large workshop complex had been realized in Zevenaar and the machinery was regularly adapted to the latest state. Excellent professionals, who were practically all trained in their own company, provided an excellent product. After starting an own engineering room, larger projects could be attracted.

At that time, the focus was not only on craftsmanship and capacity, but also on organization and planning. In 1983 three operating companies were created, all located at Handelsdwarsstraat in Zevenaar, with various activities namely: - JAZO Zevenaar bv: plate and construction work (1961) - JAZO Ovenbouw bv: manufacture and sale of bakery ovens (1983) - Allac Zevenaar bv: industrial painting (1978) 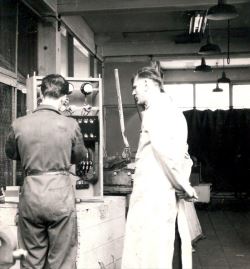 In 1985 the computer made its appearance and from 1988 the majority of the business runs through this tool. Partly because of this, it was even easier to meet the increasingly stringent requirements of customers in terms of execution, reliability, lifespan and delivery time. In 1998 JAZO set up and implemented a quality management system according to ISO 9001. This certification guarantees continuity for the future with the following benefits: - Customers are assured of a good and reliable product that can be delivered on time. - JAZO can offer its goods and services competitively on the market at manageable costs.

In 2003, the next generation came into the company. Axel Jansen was promoted as manager by the current management and good agreements were made to transfer the company. The new impetus within the company again provided the necessary positive improvements. From the healthy financial base, new developments were accelerated. The introduction of laser technology in 2004, the expansion of aluminum production and further automation of drawing room and production. Mr. Jan Jansen junior transferred the company completely to his son Axel Jansen in 2006.

Not only did the company change with the times, the number of employees also developed rapidly. Pascal Bos, who was hired by JAZO as manager engineering, built a new culture within the company with the team. The core values (PRET) that were formulated together and the way of thinking and working turned out to be the textbook example of Social Innovation. This resulted in 2010 the title "Smartest company in the Netherlands".

In 2010 a new company was set up from JAZO, named FlowGrill bv. From that moment on, the developed products for luxury yacht building were offered to the market by FlowGrill bv. The company operates very successfully as a sister company of JAZO Zevenaar bv with Arnold Woerts as director.

The smart social innovation ensured that JAZO in 2011, as a forerunner of Smart Industry, switched to a fully digital production. Transfer of documents was no longer done on paper. Every workplace was equipped with a workstation and by means of in-house developed software (iCenter) the 3D files were presented to the employees together with logistic information.

In 2015, JAZO was also sensitive to the economic crisis that had been going on in the Netherlands for around 7 years. The company was adjusted to the economic situation at an accelerated pace. This meant further reduction of overhead costs at the office and optimization of production by making the processes LEAN. The LEAN working method ensured that the sales, engineering, sheet metal, aluminum / steel, coating, assembly and assembly on site departments started to work together at a higher level. Sales also received help in the form of the JAZO Webshop.

In 2016, the JAZO group took an interest in Chargepoint Europe, which is engaged in the development and rollout of smart charging infrastructure.

Much has changed over the past years. The company has grown enormously, in 1961 there were 3 people employed, now there are more than 100 enthusiastic professionals working in the JAZO group. The company has a modern machine park and the latest developments are closely followed.

Characteristic for JAZO is and remains the craftsmanship, team spirit, improving existing and finding new products and always looking for new challenges. In order to continue to meet these requirements, up-to-date training is required. The JAZO employees are therefore regularly trained.